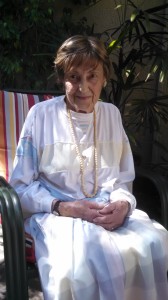 It’s no secret that family, education and Orthodox Judaism are the focal points of Jane Heller’s life. Her tidy room is simply decorated with family photos of her children and grandchildren, and religious books are neatly lined up on a shelf within arm’s reach of her bed. She’s proud not to own a television, preferring to turn to her Jewish faith as a wellspring of daily enlightenment.

Jane is a contented woman. “While my room is just a room,” she says, “when I say this place is beautiful, I am talking about the Gardens [Garden of Palms] as a whole. They have exquisite antiques and nice statuaries. The place is clean, the food is excellent and the staff is wonderful. One would be crazy not to love and appreciate this place! This place has become my family, and the staffers are like my children.”

Though Heller is relatively new on the scene at Garden of Palms (she moved in May 1, 2014), she’s no stranger to living the same Jewish values on which the community is built.

“I have been doing volunteer work since age 25,” Heller remembers. “I started a senior citizen lunch program with the National Council of Jewish Women, making lunch in a shul in Silver Springs, Maryland, near where I lived.”

Before marrying her husband Stanley, a dentist, Jane learned how to type and take shorthand, wanting to be prepared in case she ever had to support the family. Those skills came in handy when, at age 40, she went to work as a secretary at the Melvin J. Berman Hebrew Academy in Silver Springs. Initially she served as a volunteer for the headmaster of the school’s upper grades, but was later convinced to join the staff full time. A few years later, Heller moved to the elementary side of the school as that principal’s secretary. She worked at the academy for 20 years and to this day remains friends with her 65-year-old former boss, communicating through regular phone calls.

“I think titles like ‘flight attendant’ instead of ‘stewardess,’ or ‘administrative assistant’ instead of ‘secretary” are ridiculous,” she states. “I was proudly a secretary, and I believe that if you do good work and love what you do, you don’t need a fancy title. I enjoyed working with the teachers and other members of the administrative staff.

She may have left her job, but Heller stays quite busy. “Reading helps keep my mind active,” she says, and “I get a lot out of staying in touch with many of my old friends, who are quite a bit younger than I am.”

Although the fiercely independent Heller was initially intent on spending her senior years in Maryland, by the time she was 90 she’d had a change of heart. When she turned 92, one of her sons, Dov, and his wife, Chana, finally convinced her to come west and live in California.

In addition to her California family, Heller has eight grandchildren and 14 great grandchildren, many of whom lead a religious Orthodox Jewish lifestyle in Israel. Of her grandchildren, one grandson has a career in Silver Springs and four others are students at Yeshiva, devoting their life to learning and mastering the ways of their faith.

“We are a very religious family, always observe the Sabbath and love to keep learning,” she says. “We don’t just know Judaism, we live it. That’s what I like about [executive director] Murielle Chocron, baruch HaShem! As she is the kind of person who is religious herself, she knew exactly what I wanted and needed, enabling me to live as I choose.”