A dose of healthy suspicion helps fend off financial predators 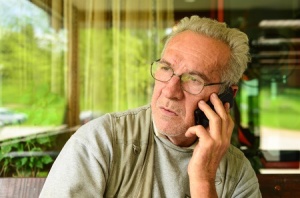 Jean, a woman in her eighties, knew something was fishy the minute she hung up the phone. It was 7 p.m. and a desperate-sounding stranger from a foreign country had called looking for help in transferring money to the United States. The caller would need her checking account routing number and said he would pay her and her husband a reward for their assistance. Being a compassionate person, Jean obliged, and although the scammers didn’t clean out her account, the experience was traumatizing for the couple, who now have caller ID and answer only calls from familiar phone numbers.

Jean and her husband were victims of what’s known as the “Nigerian 419 scam,” and they are far from alone. Fraud against elders has become so prevalent that it’s considered the crime of the 21st century, with scam artists using elaborate financial schemes to take advantage of, and steal from, the elderly. And since seniors tend to be more trusting—there was virtually no senior fraud in their earlier lives—they are the perfect targets for criminals with devious intentions.

LAPD Detective Marjan Mobasser has been investigating elder financial abuse for the past five years and handling increasing complaints with every passing month. “Unfortunately, in this age of the Internet and how easy it is to get information about people, these scams have become more and more common,” says Mobasser, adding that the phone is a weapon criminals use to take advantage of senior citizens.

There are a few other common scams that Detective Mobasser deals with on a weekly basis:

In this scam, an elderly person gets a call from someone claiming to be a relative or with a relative, most commonly a grandchild, saying he or she has been arrested or involved in a traffic accident. The scammer knows the grandchild’s name and date of birth and asks the senior to send money in order to help the family member get out of jail or receive medical treatment. Frequently seniors have been told to buy something called a Green Dot MoneyPak, sold at convenience stores. The unsuspecting victim loads the card with cash and simply reads the numbers on the back of the card to the scammer, who goes to another location and withdraws the money using those numbers.

The beauty of this ruse for the scammer is that it’s virtually impossible to trace. “A lot of these calls are done outside of the state or country,” explains Mobasser, “so there’s nothing that can be done once the numbers on these cards are given to the suspects. It’s like giving away cash to somebody you’ve never seen. You’re never going to get it back.”

In fact, there’s been so much scamming on the card that Green Dot has just announced it will discontinue MoneyPak. But where there’s a will, there’s a way, and thieves are sure to think of something else.

So what should a concerned grandparent do? Mobasser advises seniors to hang up and call another relative to verify the story that’s being told. This can be stressful, knowing that it’s possible a grandchild might be in a dangerous situation, but it’s of utmost importance to do some checking before parting with any money. One thing to remember is that a hospital emergency room is required to render emergency attention to anyone who needs it, whether the person is insured or not, so the extra few minutes you need to check the story won’t endanger your loved one’s health.

In these cases the scammer calls to say the senior has won the lottery or some sort of prize, but has to pay a certain dollar amount to cover taxes and fees associated with the winning. Usually the senior is asked to pay by credit card or Green Dot MoneyPak.

The thing to remember with this scam is that anybody who wins a legitimate prize doesn’t need to pay money in advance in order to collect the winnings, so this should always be a red flag.

You Owe the IRS

This scam involves a criminal calling to say something like, “I’m an IRS agent, you owe $10,000 in back taxes, and if you don’t pay right now we’re going to come and arrest you.” Or, “I’m from the police department and you failed to appear for jury duty and need to pay a fine of $500 today or you’ll be arrested.”

Mobasser cautions that an IRS agent would never tell someone to buy a MoneyPak and read them the series of numbers on the back of the card, but con artists prey on the fear factor—nobody wants to fool around with the IRS or the court, much less be arrested. 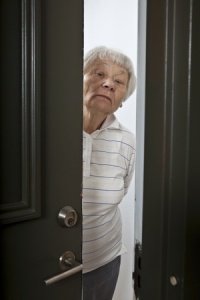 This ruse involves a call from someone alleging to work for the gas company or Department of Water and Power saying the senior is either behind on payment or a safety situation could be a danger to them, for example, a gas leak. The crime happens when the utility workers show up and one takes the senior to investigate the source of the alleged gas leak while the other goes through the property rummaging for valuables.

The lesson here is that if anybody from a utility company comes to your door for a legitimate reason, the representative is not going to object to your verifying whether or not it’s a legitimate visit. Before allowing the person entry, take a moment and call the utility company to confirm.

The bottom line with all these scams is that seniors need to listen carefully and keep their wits about them. Does it sound too good to be true? It probably is. Does the caller resist if you say you have to hang up and call back once you’ve done some research? Does the utility worker have a uniform and badge? Paying attention to these kinds of details will help keep you from falling prey to devious financial schemes.

Finally, adds Detective Mobasser, “If in doubt, call the police. That’s what we’re here for. Call us before you part with your money because once you’ve been tricked into parting with it, it’s almost impossible to get it back.”