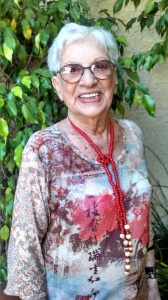 Ruth Pomerantz likes beautiful things, including the Garden of Palms’ ambience and staff. On an early summer day, she is engaged in beading. Formerly a saleslady at her local Lord & Taylor in her native New Jersey for 12 years, she says she still has a keen eye for beauty, even if her vision is more limited than it was back then. She is still able to see color and feel the shapes of the beads, and able to complete several striking pieces. She’s also a regular at the center’s regular beading classes, eager to learn a new technique.

“I looked at other places, but my daughter found (Garden of Palms) and decided it was the best for me,” Pomerantz recalls. “When my husband passed away, I had to sell my house and I could not manage it by myself, so my daughter, who has lived in California for 35 years, persuaded me to make the change. It was hard for me to make the adjustment at first, with so many new people. However, as I was a salesperson, I put my social skills to work with my daughter’s help and encouragement. Eight years have passed and this has become my home.”

Prior to her Lord & Taylor sales job, Pomerantz did quite a bit of volunteer work earlier in life. She worked in the veteran’s hospital, organizing dances every Friday night with ice cream and other treats for refreshments. She also volunteered at Children’s Hospital in New Jersey, bringing cookies, ice cream and joy to children with various disabilities. Some memories are happy, but others, such as feeding soldiers who lost their arms, made a different kind of impression, giving her a lifelong appreciation of the independence she still enjoys.

“I dress myself, put on makeup, make my hair nice and make sure my nails look perfect,” she says, adding that she likes to remind her daughter, employed with the Motion Picture Academy, of her can-do outlook. I take my own showers and do my own laundry downstairs. I walk with a walker, so I don’t get out like I used to, but my daughter takes me out to wonderful dinners at restaurants in the neighborhood.”

Although Pomerantz notes she was less religious than others in the community earlier in her life, she says she’s genuinely enjoyed reconnecting with Jewish faith and culture.

“[Garden of Palms] has rabbis here who are very nice, and since my arrival I have learned a lot about the Jewish religion, including many things I did not learn in my younger years,” she explains. “My family was poor in the early days and did not have enough money to join our local temple. It’s been fun to learn Jewish songs, Jewish culture and the services. I must say there’s nothing like the Jews. They know how to live. They know how to dress. They love education and learning.”

Pomerantz also enjoys meeting new arrivals from the East Coast, which reconnects her to her earlier life. “New York people are great,” she continues. “They like to dance, eat, visit museums…they are exciting people. When I hear of a new person moving in from the New York area, I want to get to know all about them.”